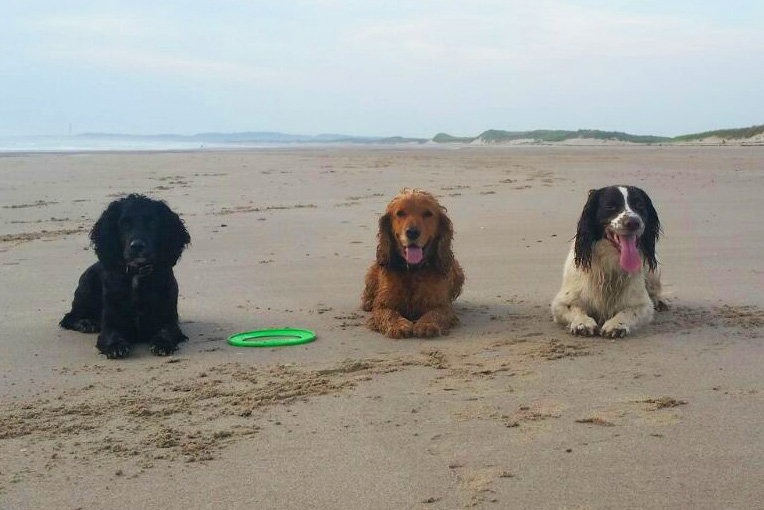 Strange title for a blog? It may make more sense if I explained these are nicknames we use for Daisy, Oscar and Buster.

I will explain further:

Oscar = Bear, Ginger Bear, Ginger Ninja – a bit of a ginger theme going on. He would probably prefer to think of himself as golden, but Golden Ninja doesn’t have the same ring to it. Cheryl Cole and Liam Payne’s baby may not appreciate being called Bear as he grows up, but I think Oscar quite likes that one.

Buster = Spud or Spotty Nose – the latter being obvious. I call him spud because the brown patch on his back reminds me of a potato. He wouldn’t mind what he was called provided you had a tennis ball in your hand.

They don’t get called by their nicknames when we are out – they are just affectionate names we sometimes refer to them by. I’m pretty sure most dog owners have nicknames for their dogs – it isn’t just me is it??

Our three came to us when they were all around 12 months old so we didn’t choose their names. I do like their names although I might have named them differently had we had them from puppies. I’m sure when Daisy was a cute puppy the name Daisy suited her; however as she was growing up I can’t help thinking she would have been more suited to the name Cujo! (no offence Dukes!). These days the name Daisy suits her just fine. Apparently, in America a cross between a Shih-Tzu, Bichon Frise and a Poodle has been named the Daisy Dog – all cute breeds so presumably a cute name was required. Our Daisy hasn’t always been as cute as she is now….unless you think chasing joggers, bikes and small children is cute!

Buster is aptly named – if you look at the dictionary definition for the word ‘blunderbuss’ – “a way of doing something regarded as lacking in subtlety and precision”. There is nothing subtle or precise about the way Buster launches himself into water!

Oscar’s previous owners must have had the ability to see into the future when they named him as a tiny puppy – Meaning of the name Oscar: champion warrior/divine strength/gentle friend.

Pretty much sums him up!