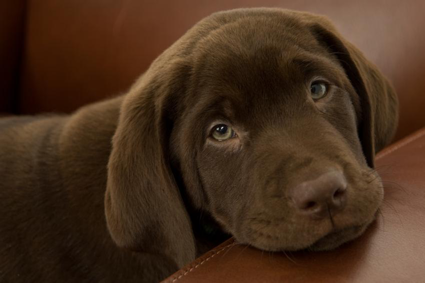 I am part way through a fortnight of dog sitting for an 8 month old chocolate Labrador.

The last few days have served as a great reminder to me as to why the people behind the film Marley & Me decided a Labrador was the perfect breed of dog to play the character of Marley. Whilst Marley wasn’t a chocolate version, he was definitely a Labrador – the breed which is often considered ‘an iconic family pooch’.

Becoming a ‘family pooch’ generally involves living in a household with energetic and excitable children. ‘On paper’, this makes the Labrador the breed of choice as they are also energetic and excitable; however a loyal Labrador puppy may soon have no sense of her own size or strength, which can soon make the once enthusiastic greetings and fun games unwelcome.

With this in mind and to summarise, my daily/hourly life with a young Labrador currently involves a young lady who does the following:

I am not suggesting only young Labradors display this behaviour, as I have (fond??) memories of Daisy, Oscar and Buster at 12 months of age and they weren’t angels by any stretch of the imagination…however if anyone is thinking of getting a puppy they should be prepared for life (and their house) to change dramatically. In fact, I would go as far to say they should ‘rent’ a puppy for a fortnight before actually making the commitment to introduce a puppy to their household.

As a child, I desperately wanted a puppy. I had many dog soft toys, but I wanted a real one. In theory I wanted it to be my best friend and I wanted to take it for walks and to buy it the best beds and toys. What I didn’t realize is my best friend (who we named Digby after the ‘Biggest Dog in the World’ film as we were told he was going to be a big dog as he had large front paws??) would actually grow up to be impossible to walk by anyone apart from my dad, would rip apart every bed we ever bought him and would not let us near his toys! I still loved him, but he wasn’t the dog I had envisaged sharing family life with and it soon became apparent the soft toy dogs were a far easier option!

My parents didn’t seek any professional help in training Digby and I think that is partly why my dream of a well-rounded four legged companion remained a dream! In fact Digby wasn’t the dog of my dreams any more than he was a big dog – medium at most – so another theory that didn’t quite pan out! When mum gave in and agreed to get a dog I don’t remember there being much research into the type of breed to get. Digby was a Labrador cross – not entirely sure what the exact cross was, but he looked very similar to a black Labrador. I do know my brother would play fight with him, I treated him like a baby and my mum spoilt him. With hindsight we probably weren’t fully prepared for the dramas and joys of having a puppy and my brother and I, being kids, simply saw Digby as a playmate, as opposed to a dog.

Anyway, back to the 8 month old Chocolate Labrador, she is currently snoring her head off whilst I type and I am thoroughly relishing this time as even though it might only be for a short period of time; I don’t have to have eyes in the back of my head or be in permanent ‘what is she up to’ mode.

Oh, and try telling said Chocolate Labrador that her bones are still growing and therefore the periods of exercise she gets have to be limited.

Could you imagine how long my bullet point list would be with a puppy who wasn’t getting sufficient physical exercise and mental stimulation?

I would have to get a guinea pig instead.